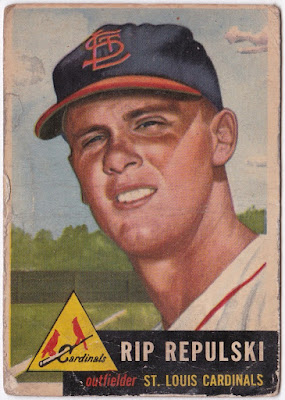 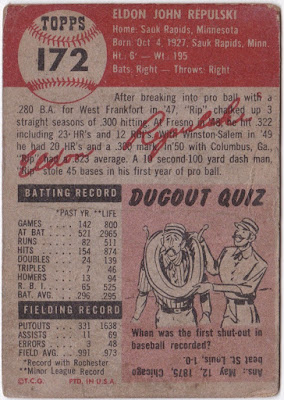 "His Walk About" - A .269 hitter over the course of nine MLB seasons, Rip collected 830 hits, 106 home runs and made an all-star team before hanging up his cleats in 1961.  A journey man, Rip split his time with four clubs spending his first four seasons with the Cardinals, then two with the Phillies and a parts of two each with the Dodgers and Red Sox.  His first five seasons were his best, as he averaged 17 home runs a year from 1953-57 and made his only All-Star team.

"More of a love bite really..." - This card has some serious edge wear, and not just at the corners, as well as a sort of over-all dirty look to it.  The scans don't show it, but there's also a good amount of creasing.  I'm not complaining, but I'm not going to sit here and insists it's in beautiful condition either