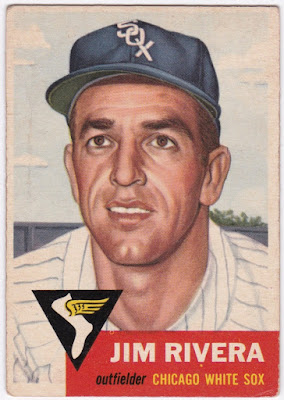 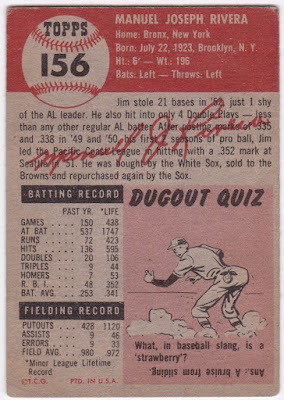 "His Walk About" - Rivera was a career .256 hitter who collected 911 hits and hit 83 home runs over the course of ten MLB seasons.  A fast runner, (Rivera finished 1st or 2nd in Stolen Bases in the AL for seven straight seasons from 1952-58) Rivera spent 8 of his ten seasons with the White Sox, as well as a year each with the St. Louis Browns and Kansas City Athletics.

"That's Not a Knife" - It's a head first slide.  "Jungle Jim," as he was dubbed by Chicago sportswriter Edgar Munzel, is said to have ran the bases with reckless abandon and would slide head first decades before it became fashionable.

"More of a love bite really..." - This card is in about as good of shape as I can hope to find a '53 Topps.  I guess if I really wanted to nit pick I'd point out some decolorization and that the corners aren't pristine, but I'm not interested in doing that.