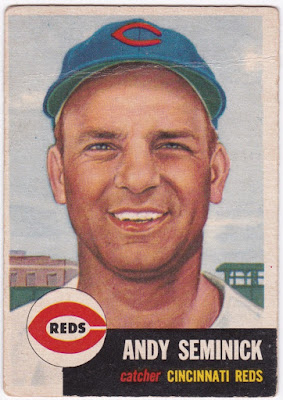 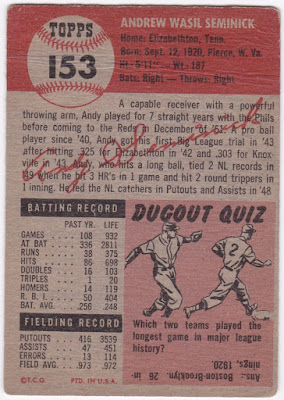 "His Walk About" - Over the course of 15 seasons (the first 12 with the Phillies) Andy Seminick compiled 953 hits and made an All-Star team.  Over an 8 year stretch from 1946-53 Seminick averaged over 16 home runs a season despite only reaching the 400 at-bat mark once during that span.

"That's Not a Knife" - It's the veteran leader of the 1950 Philadelphia "Whiz Kids," according to Robin Roberts anyways.  "Grandpa Whiz" as Seminick was dubbed by local writers, had his best season in 1950 hitting 24 home runs and batting .288, while helping the Phillies win the National League Pennant.

"More of a love bite really..." - There's no ignoring the crease running across the top of this card, but it's not a life threatening injury either.  This card works just fine in the condition it's in.