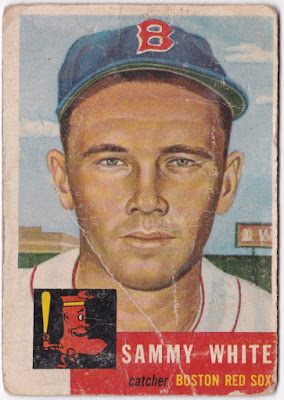 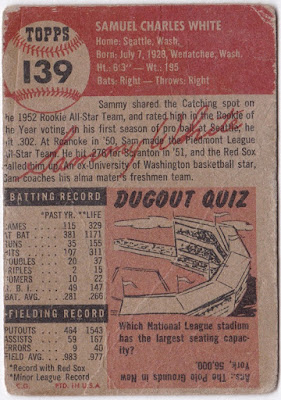 "His Walk About" - Sammy amassed 916 hits over the course of 11 MLB seasons.  He spent his first nine years in Boston, where he was an All-Star in 1953, before closing things out by spending a season each with the Milwaukee Braves and Philadelphia Phillies.

"That's Not a Knife" - It's three runs scored in one inning.  On June 18, 1953, Sammy White became the only 20th Century player to score three times in one inning, during an inning that saw the Red Sox score 17 runs against the Detroit Tigers.  And while "it's not a knife," it could have also been a college basketball All-American (which White was at Washington), a Pro-Bowler, or a Pro-Golfer (both of which White was after retiring from baseball).

"More of a love bite really..." - This card is pretty much exactly what I think a 1953 Topps card should look like as far as it's condition.  It really is the perfect amount of wear and tear without taking any thing away from the card.  I don't understand the appeal of high grade vintage cards?  They don't look "vintage," and that's half the fun of collecting them. 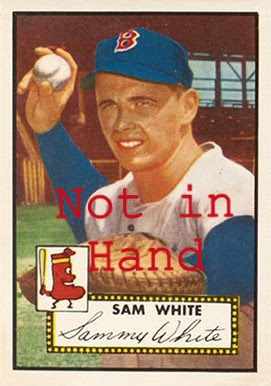