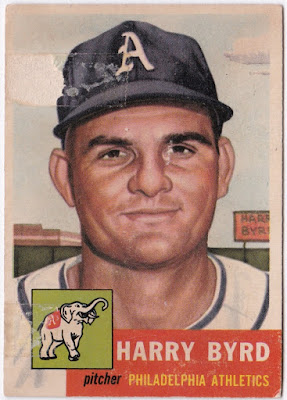 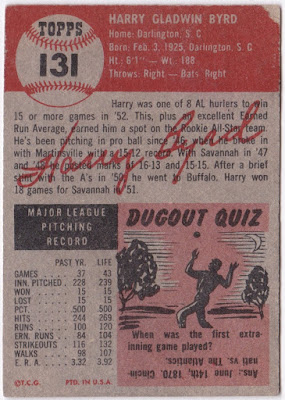 "His Walk About" - Harry pitched for five different teams over seven seasons in the bigs.  He saw the most action, by a wide a margin, with the Philadephia Athletics in '52 and '53, and was even named AL Rookie of the year in '52 after going 15-15 with a 3.31 ERA.  He followed that up with a league high 20 loses in '53.  Following the '53 season Byrd had stints with the Yankees, White Sox, Orioles and Tigers, before retiring with a career record of 46-54.

"That's Not a Knife" - It's the "Harry Byrd Highway," or at least it used to be.  Byrd's hometown of Darlington, South Carolina named a road after him, before changing it to the "Bobo Newsom Highway" in honor of another local product who made it to the majors.  I guess they figured Bobo's 200+ career wins were more worthy of a highway tribute.  (Perhaps there is only one paved road in Darlington?)

"More of a love bite really..." - There is a pretty significant scotch tape scar on the front of this card, but otherwise it's pretty sharp.  Almost too sharp?  I wouldn't be surprised if there was some trimming at some point in this card's history.