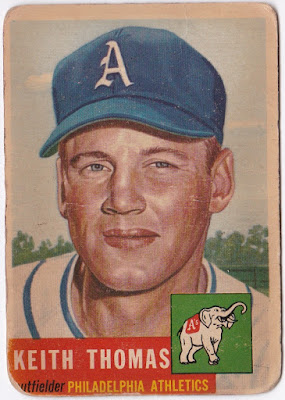 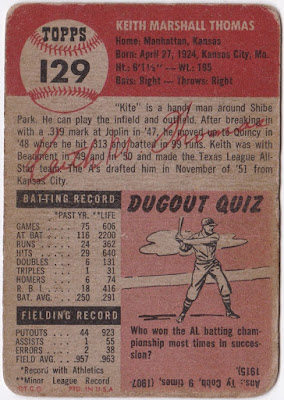 "His Walk About" - "Kite" appeared in 138 major league games over the course of two MLB seasons in 1952 and 1953.  He spent all of 1952 with the Philadelphia Athletics, and started the '52 season there before becoming a member of the Washington Senators.  He collected 52 hits and hit 7 home runs during his time in the bigs.

"That's Not a Knife" - It's a "Rule 5" draft pick.  Thomas signed with the Yankees after one season of college ball at Kansas State.  He then lingered in their farm system, before being used as a "Rule 5" pick by the Athletics.

"More of a love bite really..." - The corners, if you can call them that, have seen better days.  Even if they remained sharp, this isn't a card anyone is going to get too excited about, so what difference does it make?