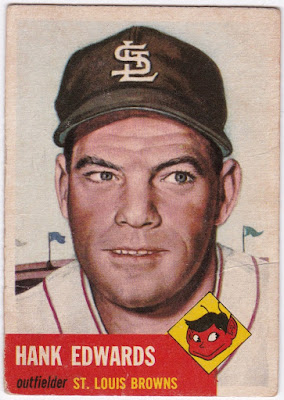 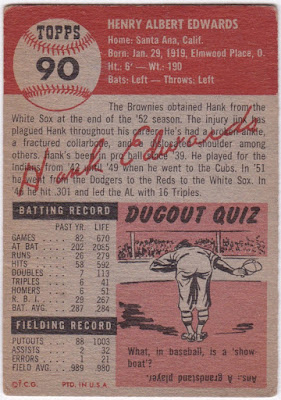 "His Walk About" - Hank took the field for six different teams over 11 Major League seasons.  His best year came in 1946 as a member of the Cleveland Indians, when he batted .301 and led the league with 16 triples.  After spending his first seven years with the Indians, he'd close out his career with brief stints as a Cincinnati Red, Chicago Cub, Brooklyn Dodger, Chicago White Sox, and finally with the St. Louis Browns during his final season in 1953.  He retired with 613 career hits and .280 lifetime average.

"That's Not a Knife" - No, but even without a knife, Edwards still managed to find ways to hurt himself.  Over the course of his injury laden career, he lost time to a broken ankle, fractured collarbone, and dislocated shoulder to name a few.

"More of a love bite really..." - This card has it's share of creasing, and the colors aren't as vibrant as they once were, then again, perhaps that's just the way St. Louis Browns cards look.  All in all, it's survived pretty well.

"Down Under" - Edwards is card #176 in the '52 set.  I prefer this '53 and it's an easy call.  Sure, the Browns are sort of a novelty, but that little demon logo guy would still be awesome, even if he didn't turn into an Oriole and instead continued showing up every year in Topps sets.  Edwards moves the '53 set back in front 15-14-1.