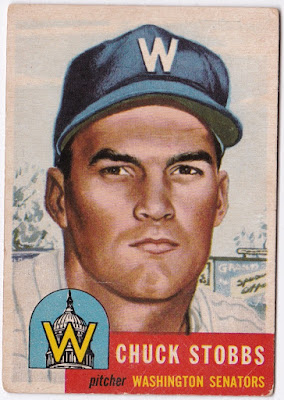 "His Walk About" - Chuck Stobbs pitched for 15 seasons in the Major Leagues.  Eight, non-consecutive, with Washington Senators.  During his second stint with the Senators, Chuck stayed with the team as they relocated to the Twin Cities area of Minneapolis/St.Paul and changed their name to the Twins.  He played one season with the Twins before retiring.  Chuck spent his first five years in Boston as a Red Sock, then one in Chicago as a member of the White Sox, before becoming a Senator/Twin.  That run lasted nine years, but for half a season with the St. Louis Cardinals mixed in.  He got around.  With a career ERA of 4.29, Stobbs ended up with a record of 107-130.  He won ten or more games seven times, and only lost ten or more five times, including a league "best" 20 loses in '57 with the Senators.  I've said it on other blogs, but there is no shame in leading the league in loses.  Bad pitchers don't get the chance to lose a game in the majors, let alone 20 in one season.

"That's Not a Knife" - But Stobbs probably wishes Mickey Mantle had used a knife, instead, Mantle used a bat, and hit home run off Stobbs that went an estimated 565 feet and clear out of Griffith Stadium in Washington.  It's often credited with being the genesis of the term "Tape Measure Home Run."

"More of a love bite really..." - Maybe some people could find things to complain about with regards to the condition of this card, I'm not one of them, and as far as I'm concerned it's "mint."  I envy those with so few issues in their life that they can find the energy to nit-pick 65+ year old baseball cards beyond the condition of this one.

"Down Under" - Stobbs is card #62 in the 1952 set.  As a first series card it's available in both red and black backs.  I have both, and though there's a slight premium placed on the black back, the red looks better.  But red back or not, it's not as nice as this '53.  I'm a sucker for painted outfield walls on Topps cards from '52-56.  And it pains me to make this call, because a pitcher pictured with a bat, as Stobbs is on his '52 Topps, will never not be awsome.  Espcially when that pitcher can't hit, which Stobbs could not (zero HR's in 684 plate appearances, and .176 avg.)  That evens the tally at 14-14-1.