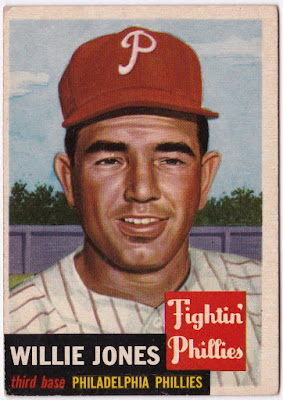 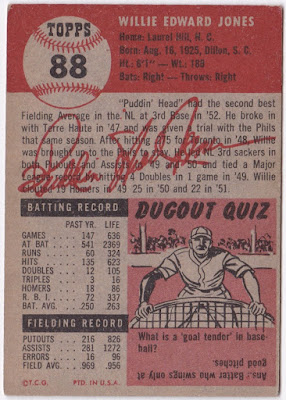 "His Walk About" - Willie Jones was twice named an All-Star over the course of his 15 year career, both times as a member of the "Fightin' Phillies."   His first All-Star selection came in 1950 as one of the "Whiz Kids" on Philly's World Series Championship team.  He spent his first 13 seasons in Philadelphia, before brief stints with the Cincinnati Reds and Cleveland Indians at the end of his career.  Along the way he hit 190 home runs and picked up 1,502 hits.

"That's Not a Knife" - Jones, for reasons that remain a mystery to me, was nicknamed "Puddin' Head ."

"More of a love bite really..." - This card suffers from a decent amount of off-centering and also has a bit of a slant cut.  I wouldn't completely rule out the possibility that someone tried to trim it at some point, though I suspect it just came out of the pack that way.