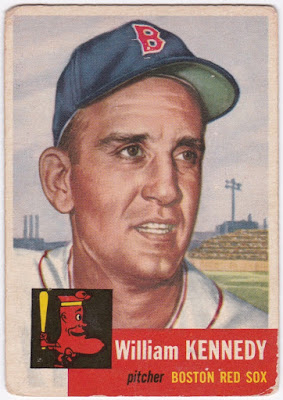 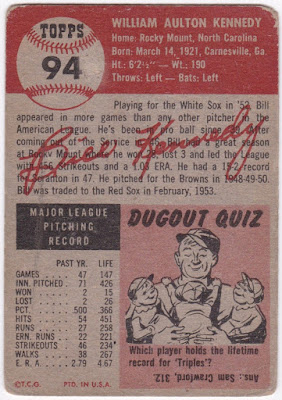 "His Walk About" - Don't fooled by the 15-28 record and 6 career saves posted by William Kennedy over the course of his 8 seasons in Major League Baseball.  He saw a lot more action than those numbers would indicate, appearing in 172 games (including a league leading 47 in '52) over those 8 seasons.  The Carnsville, GA, born Kennedy spent time with five different teams, primarily the St. Louis Browns, as well as the Reds, Indians, Red Sox, and White Sox.

"That's Not a Knife" - Not that Kennedy likely would have been all that worried if it was.  The World War II Vet worked as a bartender at Ballards Eagles Lodge, of the Fraternal Order of Eagles in the Seattle area after his playing days were over.

"More of a love bite really..." - There's some decent wear around the corners on this card, and the colors are a little dull, but it's in otherwise pretty good shape.