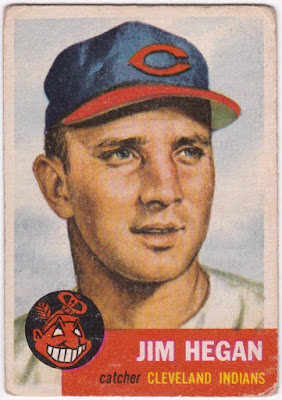 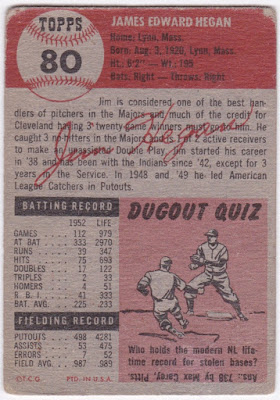 "His Walk About" - Hegan made his Major League debut in 1941, and despite losing 3 years to Military Service, still played for 17 seasons and made five All-Star teams.  Considered one of the best defensive catchers in the game, Hegan only reached the mile stone of a 100 hits in a season twice.  Perhaps he preferred hitting in cooler fall weather, because he homered and drove in five runs in the 1948 World Series, while helping Cleveland defeat the Boston Braves in six games.  Hegan spent 14 of his 17 years with The Tribe, while making cameos with the Phillies, Cubs, Giants, and Tigers at the end of his career.

"That's Not a Knife" - It's a "Seattle Pilot," and Jim's son Mike.  Mike Hegan played for 12 major league seasons, and was name an All-Star in 1969 as a member of the Seattle Pilots.

"More of a love bite really..." - This card is in very nice shape.  Nothing to complain about here.  Cards from this era that are too pristine all most make me nervous.  This one you can pull out and handle without feeling like you're going to hurt it, and it still somehow feels new-ish despite being nearly 70 years old.

"Down Under" - Hegan is card #17 in the 1952 set.  I think anyone with eyes is going to come to the same conclusion I have, the '52 is a much cooler looking card.  That's no knock on this '53, which is a perfectly acceptable baseball card, with a hat and logo, and all the basics, the '52 is just a classic "catcher" card that today's sets sadly lack.  Hegan moves the '52 set back in front, with the tally now sitting at 13-12-1. 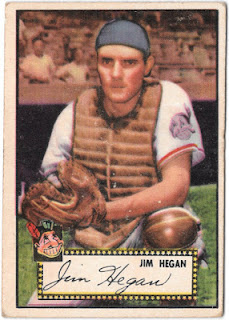