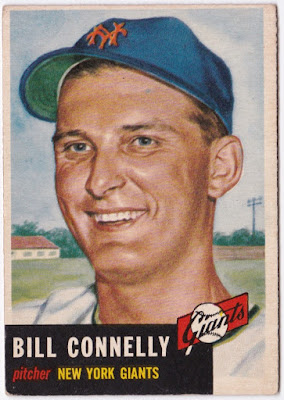 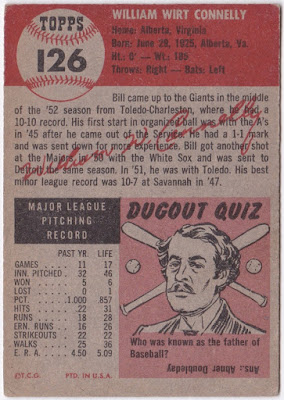 "His Walk About" - Connelly pitched 66 and a third innings spread out over 25 games in parts of four seasons.  He broke in with the Philadelphia Athletics in 1945, going 1-1 with a 4.50 ERA in two appearances.  He didn't make it back to a major league mound again until 1950, when he made two relief appearances with the White Sox and two more with the Tigers.  After another stint in the minors, he came back in 1952 with the New York Giants and posted a 5-0 record and 4.55 ERA.  New York brought him back in '53, but Connelly struggled, going 0-1 and posting an ERA north of eleven.  That was it for his MLB playing days.

"That's Not a Knife" - It's an extra base hit.  Connelly holds the all-time record for most career hits without a single, at four.  In 1952 he had two doubles and two triples.  Those were the only four hits of his career in which he went 4 for 19, good for a .211 career average, and respectable .526 slugging percentage.
*Correction: Wikipedia appears to be wrong, the record is actually 5, although Connelly and Hank Arft both set the then record of 4 in 1952.

"More of a love bite really..." - This card is a bit off-centered, but otherwise pretty sharp, perhaps a little too sharp.  I would not rule out the possibility of some trimming, but I can't really tell, or really care for that matter.