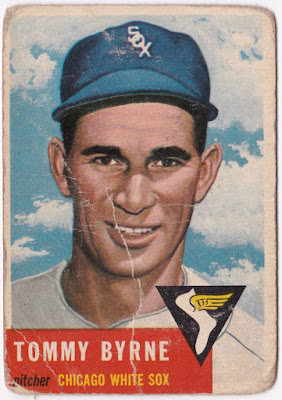 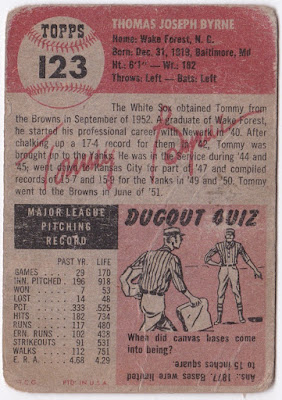 "His Walk About" - Tommy Byrne debuted with the Yankees in 1943, then lost the next two years to military service.  By the time he retired following the 1957 season, he had compiled 13 years in the majors. His first seven seasons, and his final four were spent in The Bronx.  In between he spent parts of two seasons as a St. Louis Brown, and split one as a Washington National and Chicago White Sox.  His best season came in 1955 as a Yankee, when he went 16-5 as a starter and posted a 3.15 ERA.  He appeared in four World Series with the Yankees winning rings in '49 and '56.  In Game 2 of the 1955 series against the Brooklyn Dodgers, Byrne threw a complete game and was credited with the win in a 4-2 Yankees victory.  The Dodgers would win the series in 7 games.

Also, a decent hitter, Byrne hit .238 with 14 home runs over the course of his career.

"More of a love bite really..." - A There is some fairly significant surface wear on both sides of this card.  There is some evidence that it may have one point also had corners, but you sort of need to use your imagination.  The creasing as a result is not all that noticeable.