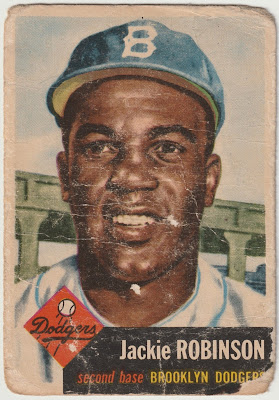 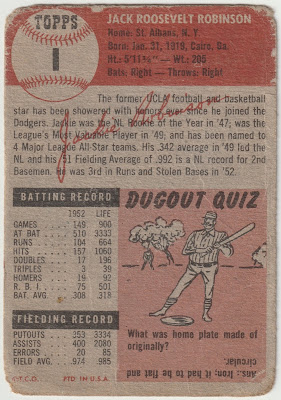 "His Walk About" - Jackie Robinson played for ten Major League seasons, though every major league player still wears his number annually once a year.  A six time All-Star, and '49 NL MVP, Robinson was a .311 career hitter.  He retired with 1,518 hits and 137 home runs, numbers that seem comically trivial given his impact and legacy, both on and off the field.  During his decade with the Brooklyn Dodgers, he helped "The Bums" win six NL Pennants and the 1955 World Series.

"That's Not a Knife" - It's another Varsity Letter from UCLA.  Jackie won Varsity Letters in four sports while attending UCLA.  He was an All-Conference running back on the unbeaten 1939 Bruins Football team that finished 7th in the Nation (they had a few ties).  He was named the West Coast Conference MVP for Basketball with UCLA in 1940 and in Track and Field Robinson was the 1940 NCAA Long Jump Champion.  Baseball was his "worst" sport at UCLA, where his accolades failed to match those in his other three sports.

"More of a love bite really..." - This card is well worn, but is still on the short list for "favorite" in my entire collection.   There are no serious flaws and you can't help but feel as though you are holding a small piece of American History when it's in your hand.  If you own one in a PSA jail, I strongly suggest you crack it loose and give it a try.  You won't be disappointed. 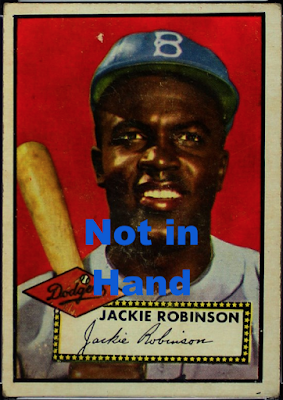