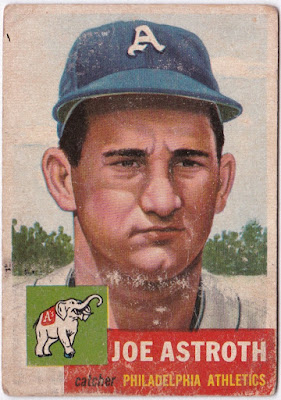 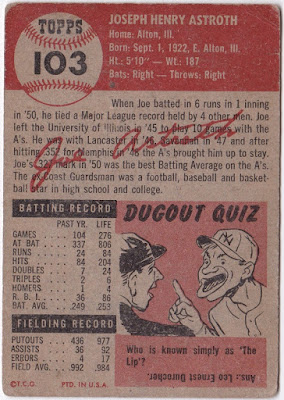 "His Walk About" - Joe Astroth played in parts of 10 Major League seasons, all as a member of  the Athletics, albeit 8 as a Philadelphia Athletic and 2 as a Kansas City Athletic.  A .254 career hitter, Astroth finished with 13 career home runs and 401 hits.  He appeared in more than a hundred games in a season twice during his career.

"That's Not a Knife" - Astroth ran a bowling alley and dairy bar after his playing career came to an end.  I believe "dairy bar" is another way of saying ice cream shop, but I could be wrong.

"More of a love bite really..." - A good amount of color fading and white marks are present on this card.  While it's sturdy enough and isn't terribly creased, it certainly looks it's age.