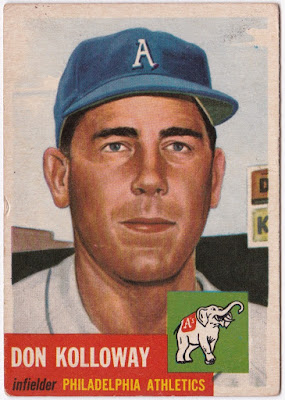 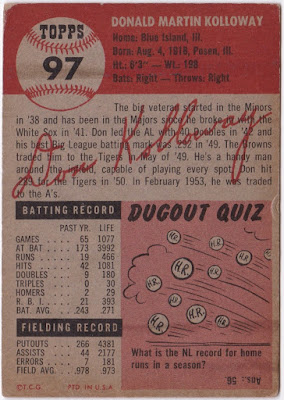 "His Walk About" - Don lost two years in his prime to Military Service.  He still ended up with 12 years in the bigs, parts of 8 with the White Sox, 4 with the Tigers, before wrapping it up in 1953 by appearing in 2 games as a Philadelphia Athletic.  Don isn't the first guy I've come across whose career ended up having timing like this.  He had a long, legitimate career, but of the mere two Topps cards his grand kids could track down, one was with a team he only appeared in two games with.  Don compiled 1,081 hits over his career and was a lifetime .271 hitter.  His best season was in 1942 with the White Sox when he led the league with 40 doubles and drove in 60 runs.

"That's Not a Knife" - And it's not a stat line from a Little League game either, even if it looks like one. On June 28, 1941, in Cleveland, Don led the charge for the White Sox in a 6-4 win.  In addition to hitting two home runs, Don stole four bases, including a sequence in the 9th, when after reaching on a fielders choice, he stole 2B, then stole 3B, before finally stealing home to give the White Sox their final margin of victory.  (He only stole 11 bases on the season)  After Baseball Kolloway operated a Tavern in his hometown of Blue Island, Illinois.  I imagine that game was recapped more than once there over the years.

"More of a love bite really..." - A common defect I see on these older cards is present on this one.  On the front left edge of the card, about halfway up, is part of some sort of circular impression.  I see that round impression showing up with regularity and really have no idea what causes it.  Perhaps it's some sort of binding that was common in old scrap books?

"Down Under" - Kolloway is card #104 in the 1952 set.  While neither of these two Kolloway's feature the most exciting photo/painting selection, I prefer the colors on the '53.  I'm also biased towards teams that no longer exists.  Yes I know the Athletics still exist in Oakland (with a stay in Kansas City in between), but when I see a blue hat and "Philadelphia," that's different enough for me.  This Kolloway extends the '53 set's lead to 17-14-1.