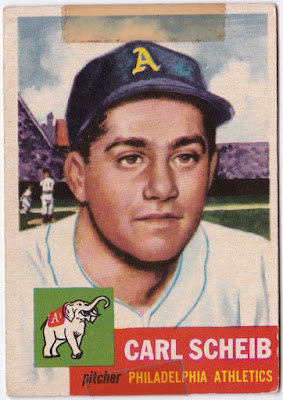 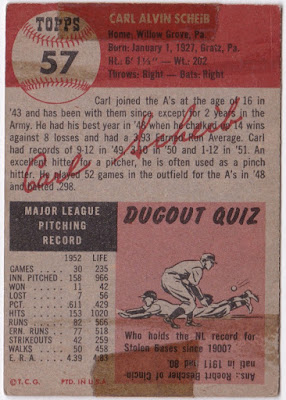 "His Walk About" - Carl spent 11 years in the big leagues, almost entirely with the Philadelphia Athletics.  In his final year, 1954, Carl appeared in one game for the Athletics, before wrapping up his career with the St. Louis Cardinals, who appeared in four games with.  He went 45-65 for his career with an ERA of 4.88 when it was all said and done.  I'm not sure Scheib's time in the majors couldn't have been better spent as a hitter.  With a .250 career average, Scheib saw a 104 at-bats in 1948, batting .298 with an OPS of .839 while driving in 21, hitting 2 homers, 3 triples, and 8 doubles.  Extrapolate that out to a 500-600 at-bat season and those numbers look very respectable.

"That's Not a Knife" - Nope, it was a book.  "Wonder Boy - The Story of Carl Scheib: The Youngest Player in American League History" by Lawrence Knorr, is biography on Scheib published in 2016.  Scheib was the youngest player to ever appear in an MLB game when he made his debut in 1943.  The record didn't stand long, as Joe Nuxhall broke it the following season.

"More of a love bite really..." - This card appears to have been the victim of a scotch tape attack, but has managed to survive without too much scaring.  I kind of like the look of the discolored tape on these older cards.  Or at least, I prefer it to the paper loss that often occurs during attempts to remove it.

"Down Under" - Scheib is card #116 in the 1952 set.  Scheib looks like two different people on these two cards, which makes picking which one I like more a little difficult.  As much as I love the red background on the '52, the little background scene at home plate on this '53 is just enough to slightly tip the scales towards the sequel.  It's close, but I prefer the '53.  That ties things back up again at 10-10-1. 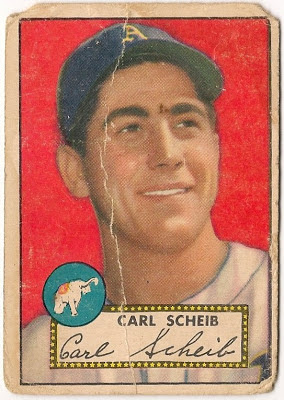