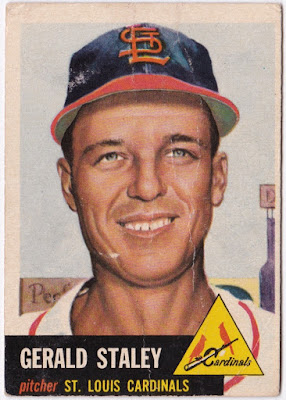 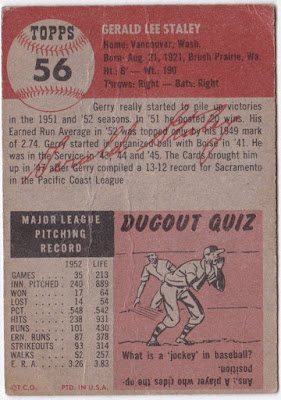 "His Walk About" - "Gerry" hung around for an impressive 15 MLB seasons.  The first 8 years were spent in St. Louis as a starter, where he strung together five straight years of at least 10 wins, including an impressive run from '51-53 where he won 19, 17, and 18 while being named to two All-Star teams (he would be named to a 3rd towards the end of his career).  The final seven years of Staley's walk about were spent coming out of the bullpen, mostly with the White Sox, but with stops as a K.C. Athletic, Detroit Tiger, New York Yankee, and Cincinnati Red as well.

"That's Not a Knife" - And it wasn't a World Series Ring either, but Gerry did help the White Sox win the 1959 AL Pennant before eventually dropping the World Series to the Dodgers in six games.  Gerry appeared in 64 games for the Sox and finished 45 of them while being named to his 3rd All-Star team and finishing 23rd in AL MVP voiting.

"More of a love bite really..." - This card has some significant horizontal creasing, which is a bit unusual.  I'm not sure how that happens in the course of normal wear and tear, but there they are, running vertically down the center of the card. 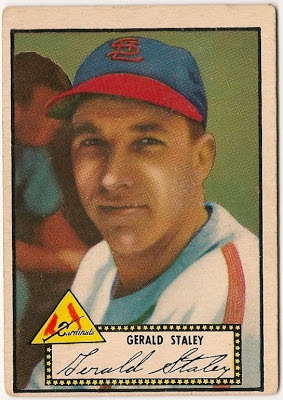