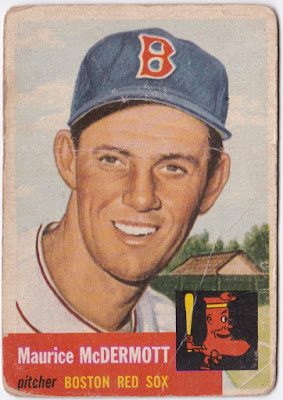 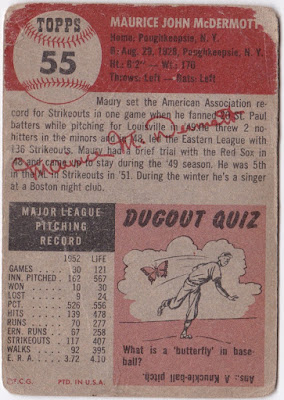 "His Walk About" - 12 MLB seasons, the first six with Boston, the next six split between five different cities, was the ground covered by McDermott.  A 3.91 career ERA was posted by McDermott, along with 69 wins and he also picked up a World Series ring with the Yankees in 1956.

"That's Not a Knife" - It was in fact an Arizona Lottery ticket good for $7,000,000 that McDermott found in his possession in  1991.  McDermott who had spent time in jail for multiple DUI arrest due to his struggles with drinking, gave up alcohol after cashing in his winning ticket.

"More of a love bite really..." - This card has more than its fair share of surface wear, both front and back.  The corners are mere memories at this point and there is some pretty good creasing as well.  But when it's all said and done, it's a completely acceptable copy.

"Down Under" - McDermott is card #119 in the 1952 set, I actually have two copies of it, both in pretty terrible shape.  While McDermott clearly appears to be in better health on this '53, I prefer the '52 card.  There's something about the way the green background contrast with the Red Sox uniform that I really like.  This ties things up a 9-9-1. 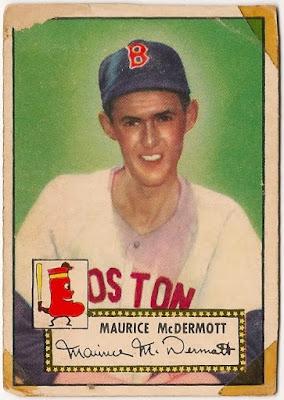