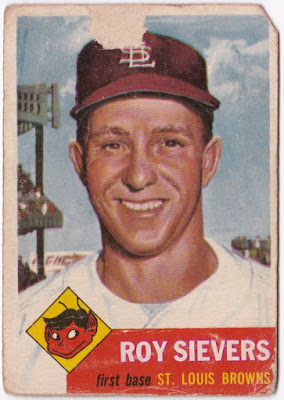 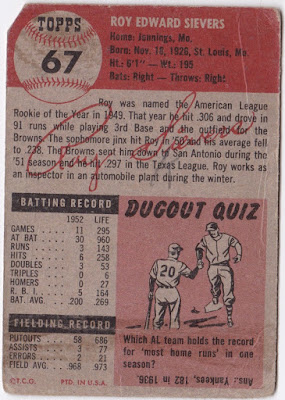 "His Walk About" - Sievers had a fantastic 17 year career in the big leagues that saw him play for five clubs.  Had he spent his entire career with one franchise he could very well have his jersey hanging in a stadium somewhere.  As it stands, the 1948 Rookie of the Year and 4x All-Star finished with 318 home runs, and 1,147 RBI's.  Sievers made a run at the Triple Crown in Washington in 1957 when when he led the AL in home runs (41) and RBI's (114), while finishing 8th in batting (.301).

"That's Not a Knife" - Nope, it was a bit of a snub.  When Sievers hit his 300th home run, he was at the time only the 22nd MLB player to ever reach that number.  He and Gil Hodges hold the dubious distinction of being the first two players to reach 300 homers and not be inducted into the Hall of Fame.

"More of a love bite really..." - This card has some issues.  Someone felt the need to clip the upper right corner, I presume to remove some tape.  That decision was probably made after the attempt to remove tape from the top center of the card resulted in all that paper loss.  I would have preferred more paper loss in the corner, but in the end, it's still a baseball card. 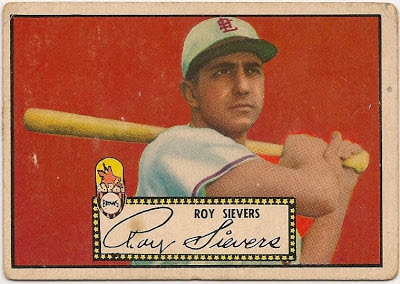