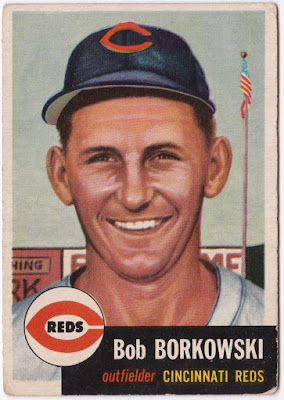 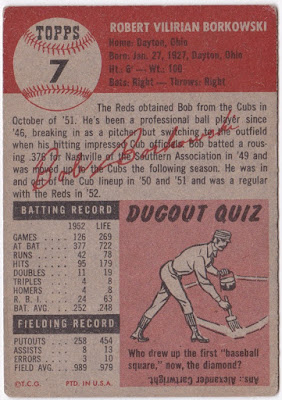 "His Walk About" - Borkowski played for parts of six major league seasons, but only once appeared in more than 100 games.  A .251 career hitter, Bob collected 294 hits and 16 home runs.

"That's Not a Knife" - It was a trade that brought the Dayton, Ohio native Borkowski from the Cubs to the Dodgers during the 1955 season.  It would be Borkowski's final season in the Big Leagues, and he appeared in 9 games for the eventual World Champion Brooklyn Dodgers.  It was the only Pennant winning team Borkowski ever played for.

"More of a love bite really..." - Much like Borkowski's career, this card clearly has some history, but there really isn't too much to show for it.  The colors are still very bright and there is still some semblance of a corner or two.

"Down Under" - Bob Borkowski is card #328 in the 1952 set. That's a high number that I don't have (seems to be a common theme so far).  I prefer this '53 sequel to the original.  I'm not wild about the horizontal cards in the '52 set and the Borkowski is a rather bland one.  But this isn't just based on my dislike of the '52, I actually kind of like this '53 sequel.  Something about the flag pole and colors is very appealing to me, it adds an almost comic book effect to the card that I really like.  13 cards in, the 53's now take a 7-6 lead in this category. 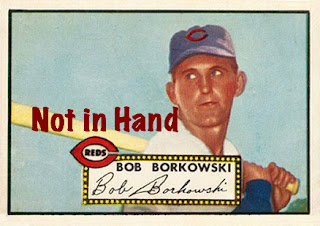