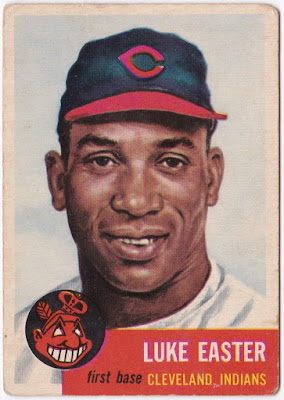 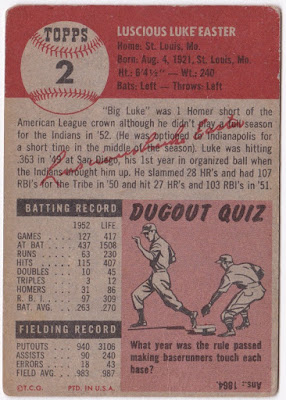 "His Walk About" - Luke saw time during six MLB seasons, only three of which were anything close to full.  But Easter made the most of those three almost full seasons, averaging 28+ HR and 100 RBI from 1950-52.  For "some reason" Easter spent the better part of the 1950's in the minor leagues where he went all "Crash Davis" and crushed 269 home runs.  Easter made his home runs count too.  He was the first player to ever hit a ball into the center field bleachers at the Polo Grounds.  His blast were dubbed "Easter Eggs" by his teammates.  Once when asked about whether a particular homer was the longest he had ever hit, Easter allegedly replied; "If it came down, it wasn't my longest."
Easter, who began his pro-career with two seasons in the Negro League, retired from pro-ball in 1964 at the age of 48.  Though his exact age is somewhat unknown, as depending on when he was asked, Easter was born anywhere from 1911 to 1921.

"That's Not a Knife" - Tragically, it was two shotguns that were used in the murder of Luke Easter on March 29, 1979 in Euclid, Ohio.  Approached outside a bank while making a deposit for the Aircraft Workers Alliance, Easter refused to turn over the money and was shot twice at close range.

"More of a love bite really..." - This card has aged very well.  It has some faint wrinkles, but we should all be so lucky to look this good when we're 65 years old like this card is.

"Down Under" - Luke Easter is card #24 in the 1952 set.  While I find this 1953 card to be a very nice looking example of a baseball card, Easter's 1952 just has more going for it.  Easter looks like a hulking giant, and for some reason the power lines and trees in the background just look like objects this monster slugger would blast balls over after clearing out field walls.  I'm going with the '52 and that ties the tally at 6-6 twelve cards in. 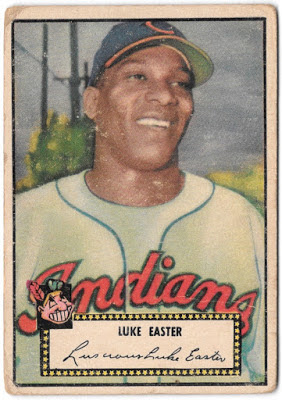