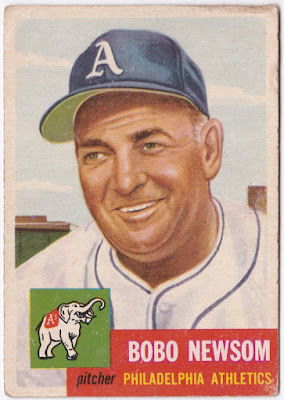 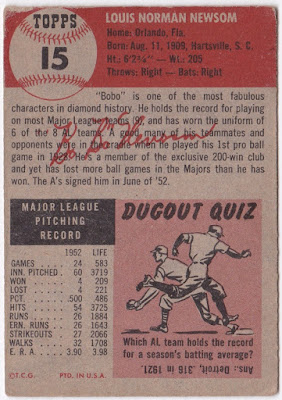 "His Walk About" - Bobo had an epic twenty season MLB walkabout with a three year hiatus from 1949-51, that saw him play for 9 different clubs and strikeout over 2,000 batters.  A 4x All-Star Bobo led the league in loses four times while compiling a career record of 211-222 while keeping his career ERA under four at 3.98.  A 3x Twenty game winner, Bobo played in two World Series and won his only ring with the Yankees in 1947.

"That's Not a Knife" - It was three complete games that Bobo threw for the Tigers in the 1940 World Series.  During Game One against the Reds, Bobo surrendered two runs in a 7-2 Tigers win.  Tragically, his father who traveled to the game from South Carolina, died that same day.  Pitching in honor of his father in Game 5, Bobo threw a three hit shutout.  Then two days later, Bobo threw another complete game as the Tigers lost the decisive Game 8 (yes, Game 8) and World Series to the Reds 2-1.

"More of a love bite really..." - This card has some edge wear but nothing upsetting.  For the most part these 53's are finding there way to my desk in pretty good shape and at very reasonable prices, especially compared to the 52's.  What a difference a year makes I guess.