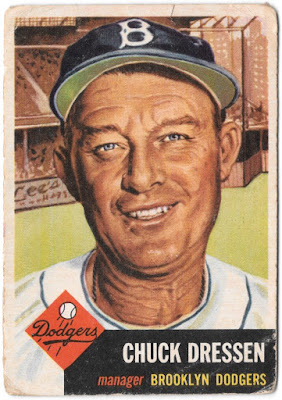 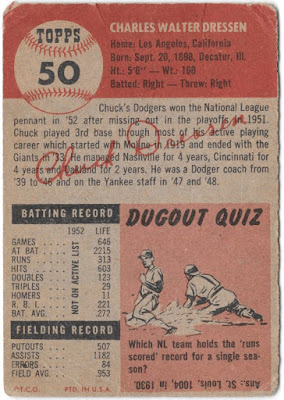 "That's Not a Knife" - Born in 1894 in Decatur, Illinois, Dressen was a two sport star, playing professional football as a quarterback for the Decatur Staley's (who would become the Chicago Bears) while he was in minor leagues.  After a solid Major League Career, Dressen made his name as manager of the Brooklyn Dodgers, including the historic run from 1951-53, chronicled in Roger Khan''s "Boys of Summer."  1951 was the year of the epic Dodger collapse down the stretch, culminating with the famous (or infamous depending on your point of view) Bobby Thompson "Shot Heard Round the World."

"More of a love bite really..." - There isn't too much as far as signs of wear on this card.  No major creases, marks or paper loss, but no one is going to confuse it as a near mint example either.