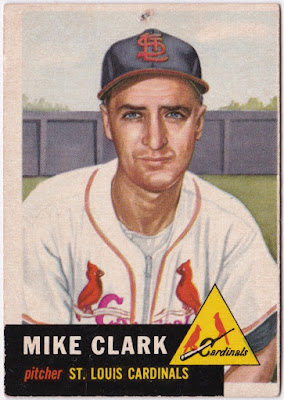 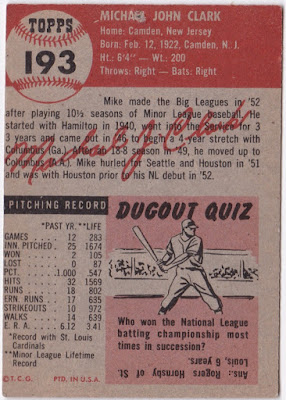 "His Walk About" - Clark labored for seventeen seasons in the minors, but "only" played for two seasons in the majors  ("only" feels like a silly word to use when describing anyone's major league career). Clark finally made his debut at the age of 30 for the Cardinals in 1952.  During '52 and '53 he'd appear in 35 games and make 6 starts.  He posted a career record of 3-0 and recorded a save while posting a 5.31 ERA.

"That's Not a Knife" - It's two decades in the minor leagues.  Clark played in the minors from 1940 to 1959 (with three years missed to military service).  Depending on where you look he won somewhere between 159 and 162 games in the minors.

"More of a love bite really..." - This card is significantly off-centered, to the point that it almost effects the text on the back.  I also wouldn't be shocked to learn that it may have been trimmed at somepoint, though I'm not sure why anyone would make the effort to "improve" an off-centered Mike Clark card.  More likely, I'm just not used to seeing sharp corners on these cards and it looks unnatural to my eye.