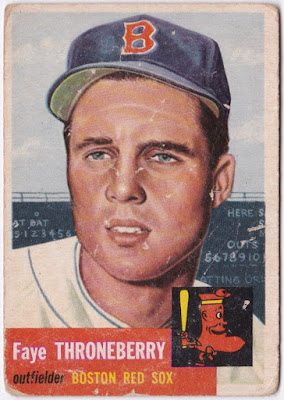 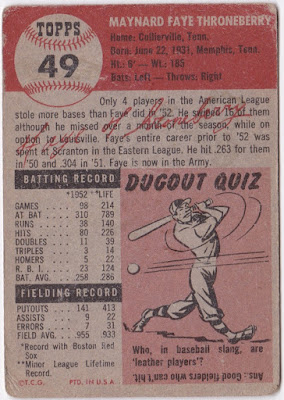 "His Walk About" - 307 hits over 8 MLB season's (with two lost to military service) was the ground covered during Throneberry's walk about.  1959 saw Throneberry set a number of career high's including games (117) and home runs (10).  He spent his first four seasons with the Red Sox, before spending four with the Washington Senators, and finally wrapping things up in 1961 with one season as an L.A. Angel after being selected by them in the expansion draft.

"That's Not a Knife" - Nope, it was a field dog, or as often called, bird dog or "pointer."  After his playing career, Throneberry became a trainer of Field Dogs and in 1973 he trained Miller's Miss Knight, who won the Field Trials National Championship in 1973.  The dog was inducted into the the Hall of Fame for Field Dogs in 1981.

"More of a love bite really..." - This Throneberry has it's share of surface wear, but overall is in fine shape.  There's nothing that really stands out or detracts from the card.

"Down Under" - Marv Faye Throneberry is card #376 in the 1952 set.  For those of you paying attention, you'll notice that's a high number, and won't be surprised to learn I don't have a copy of it in my collection.  I like what I've seen of the '52, and this is a close call, but I'm inclined to say I like the '53 better.  That Fenway scoreboard in the background of the '53 is the difference maker for me.  The running tally in this '52 vs. '53 match-up is now tied at 5 apiece. 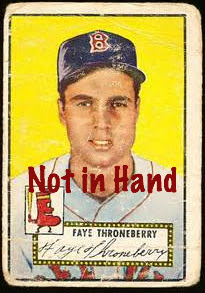