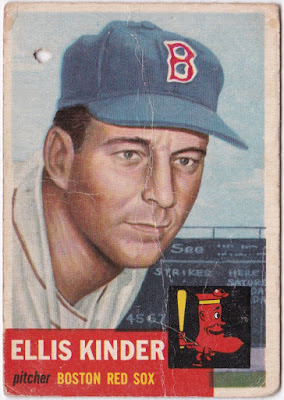 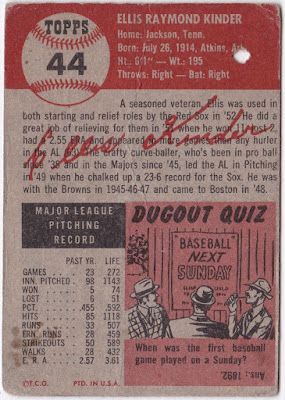 "His Walk About" - Kinder's MLB walk about lasted 12 seasons, which is actually quite impressive given he didn't start it until the age of 31.  After beginning his career as a starter, and very good one at that (Kinder won 23 games in 1949), he became one of the pioneers in the niche of relief pitching.  He retired with 104 saves, which was good for 2nd all-time in 1957 (Johnny Murphy was the leader with 107 at the time).

"That's Not a Knife" - It wasn't a knife, it was a there pound smelt (that's a fish) that fell from the sky and smacked Kinder on the head while pitching as a member of the St. Louis Browns in Fenway Park on May 17, 1947.  Dropped by a seagull flying overhead, Kinder was undeterred and picked up the a 4-2 win by throwing a complete game.  Kinder must have enjoyed the expierence, because he joined the Red Sox the following season in 1948.

"More of a love bite really..." - This Kinder appears to have crossed path with a crocodile or a hole puncher at some point, as there's a clean (cleanish) hole going straight through the card.  Thankfully, given the crease clearly shows someone folded this card in half horizontally once or twice, the hole wasn't punched while the card was folded, or there would be a hole on each side. 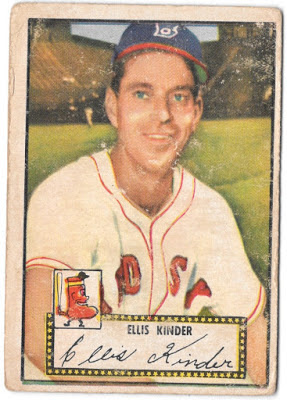