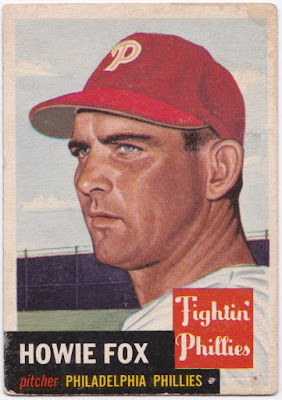 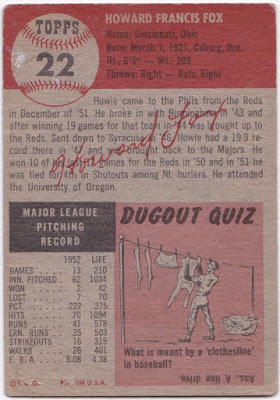 "His Walk About" - Howie's MLB walk about lasted 9 season's, seven with the Reds and one apiece with the Phillies and Orioles to end his career.  Fox tossed 1,108.1 innings and was credited with 43 wins and 72 loses while posting a career of 4.33 ERA.

"That's Not a Knife" - Actually, it was a knife.  Following his last season with Baltimore in '54, the Coburg, Oregon born Fox opened a tavern in San Antonio where he was pitching for a minor league team.  During a disturbance at the bar, Fox was stabbed to death, while trying to eject three men.

"More of a love bite really..." - This card came through it's own walk about in pretty good shape.  There's nothing that pops out too much as far as damage, and I'll happily take 273 more cards just like it.

"Down Under" - Fox is card #209 in 1952 Topps.  My copy is in terrible shape, so that may be influencing my decision, but I'm going to say I like this sequel better than the original. 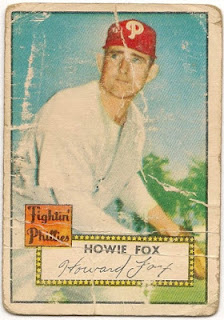